It is with an extremely heavy heart that we share the news with our readers that Pua Magasiva, known to Power Rangers fans as Shane, the Red Ranger with the power of Air from Power Rangers Ninja Storm, has passed away today at the young age of 38 years old.

He was found deceased in the early hours Saturday morning in Wellington, New Zealand.  Police report no suspicious activity involved in his passing.  We await word from the coroner on the official cause of death.

Pua Magasiva had various roles on television in New Zealand but will always be remembered by many as Shane, the Red Ranger on Power Rangers Ninja Storm.  The first Samoan Power Ranger, Shane helped usher in a new age of Power Rangers under the Disney label in 2003.

While it is late in the United States many former cast members and crew from his time on Power Rangers have responded to the news. 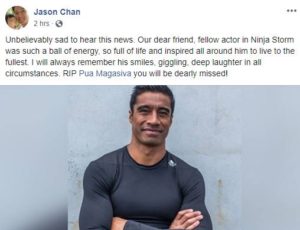 Unbelievably sad to hear the news.  Our dear friend, fellow actor in Ninja Storm was such a ball of energy, so full of life and inspired all arund him to live to the fullest.  I will always remember his smiles, giggling, deep laughter in all circumstances.  RIP Pua Magasiva you will be dearly missed! 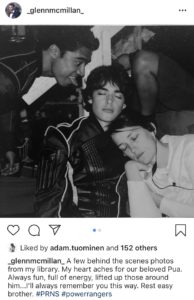 A few behind the scenes photos from my library.  My heart aches for our beloved Pua.  Always fun, full of energy, lifted up those around him…I’ll always remember you this way.  Rest easy brother. #PRNS #powerrangers 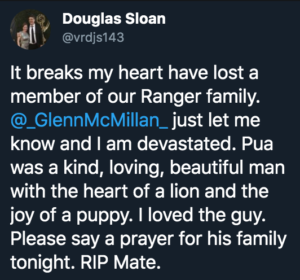 It breaks my heart have lost a member of our Fanger Family.  @_GlennMcMillan_ just let me know and I am devastated.  Pua was a kind, loving, beautiful man with the heart of a lion and the joy of a puppy.  I loved the guy.  Please say a prayer for his family tonight.  RIP Mate. 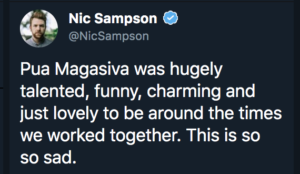 Pua Magasiva was hugely talented, funny, charming and just lovely to be around the times we worked together.  This is so so sad. 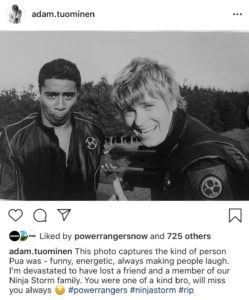 This photo captures the kind of person Pua was – funny, energetic, always making people laugh.  I’m devastated to have lost a friend and member of our Ninja Storm family.  You were one of a kind bro, will miss you always. :( #powerrangers #ninjastorm #rip

I just heard about this!  My heart is broken!  A member of our ranger family has passed away!  I’m praying for his family!

Jason David Frank, the iconic face of the Power Rangers brand and whom worked with Pua Magasiva during the former’s time on Power Rangers Dino Thunder, had the following to say on Instagram:

I had the pleasure of working with Pua Magasiva on Dino Thunder… He was such a nice kind guy.. Life is short people.. My heart goes out to his family… #RIP #ninjastorm #powerrangersninjastorm #redranger #shane You will always have the power… Once a ranger always a ranger…..JDF 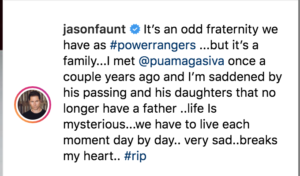 Jason Faunt (who played Wes Collins, the Red Ranger in Power Rangers Time Force) shared the following with his followers on Instagram:

It’s an odd fraternity we have as #powerrangers …but it’s a family…I met Pua Magasiva once a couple years ago and I’m saddened by his passing and his daughters that no longer have a father ..life is mysterious…we have to live each moment day by day.. very sad..breaks my heart.. #rip 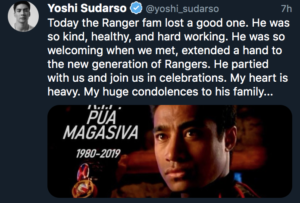 Yoshi Sudarso (who played Koda the Blue Ranger in Power Rangers Dino Charge) said the following of Pua on his Twitter:

Today the Ranger fam lost a good one.  He was so kind, healthy, and hard working.  He was so welcoming when we met, extended a hand to the new generation of Rangers.  He partied with us and join us in celebrations.  My heart is heavy.  My huge condolences to his family… 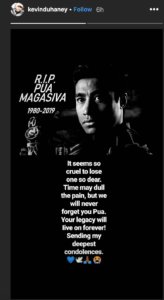 It seems so cruel to lose one so dear.  Time may dull the pain, but we will never forget you Pua.  Your legacy will live on forever!  Sending my deepest condolences.

The entire staff of PwrRngr sends our most heartfelt condolences to the family of Pua Magasiva.  He is survived by his wife, daughter, step-daughter, and brother.

This is still a developing story and we will update when appropriate.

Heads up #PowerRangers fan, RangerBoard is coming in hot with a first look at the new #LightningCollection Cog 2-pack!

Reply with ⚙️ if YOU plan to army build as well!

Is the new movie coming in 2023, we asked. Not anymore, according to this convention...

UPDATE on this story - the Licensing Con website has now *removed* the 2023 date for the 'upcoming' #PowerRangers movie.