MCM London 2019 has come and gone and this year saw Hasbro hold a panel for Power Rangers.  After the panel was over, Mona Ahn of the Power Rangers team with Hasbro took time to sit down with our own UK correspondent, Toast, to answer some of our – and some of your – burning questions.

Hasbro:  So we definitely want to continue to tell more stories.  I have nothing to announce today, but more to come.

PwrRngr:  In regards to Wave 03 (of the Lightning Collection), there is a lack of paint on Dino Charge Gold’s neck.  With the different paint apps on the armor and the accessory count, obviously there’s a lot to this figure, but was there a reason for this decision or was it just an error or a missed quality check? 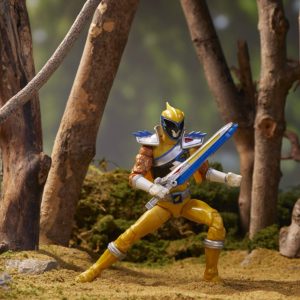 Hasbro:   So we have a lot of great references to work off of.  When it comes to the toy perspective there are certain things that we can’t always deliver on and that’s just from a business standpoint and a logistical standpoint.  There are always other factors that go on in development that we have to make a decision on.

PwrRngr:   So far there have been three different 2 packs released for the Lightning Collection.  For each two pack there is a varying level of how those characters are linked.  What is the decision on deciding on who becomes a two pack?

Hasbro:   There’s a lot that goes in to deciding on who goes in to our two pack characters.  We want to make sure they are two cool characters that you want to create a story with that tie together in someway.  There’s no set formula that we follow however, we just want to tell a really cool story with two awesome figures.

PwrRngr:   With 21 figures released in the first year of the Lightning Collection, only one of them has been female.  Is this from retailer pushback due to previous toys (Bandai’s Legacy line of Power Rangers toys) or does it influence who gets made?

Hasbro:   From a Hasbro viewpoint we want to celebrate everything that this brand embodies which is teamwork, diversity, and inclusion.  We really take that to heart.  We just started off with our figures and there’s so much more we can do with them.  More to come!

PwrRngr:   The face sculpting technology at Hasbro is incredible.  When choosing the look of a civilian head (for the Lightning Collection) is it high res stills or is it archived footage from the show?

Hasbro:   So for Beast Morphers, because we jumped in during the production of the show, we actually had the actors photographed in high definition, high resolution, 2018 technology (EDITOR’S NOTE:  the show filmed in 2018, they aren’t inferring they’re a year behind on technology) so we can get the most accurate details.  When we look at the older seasons it is a bit challenging.

PwrRngr:  So you are using the show for the older seasons?

Hasbro:   We have both.  So for example with Mighty Morphin, all we have are the reference materials and footage from the 1990’s.  So that’s where we really do our research to capture different facial expressions and different angles to really capture that essence.

PwrRngr:  Now, we understand that nothing is officially unveiled until it’s officially unveiled.  The Wave 03 of the Lightning Collection was discovered back in August when retailers jumped the gun with early listings.  And what was shown in Paris was already found in American stores – like 12 hours after the announcement people had them in hand.  Is there anything that you (Hasbro) is planning to do or can do to kind of keep the “wow” factor in your favor like today with the Zeo Blue reveal and to combat that?

(EDITOR’S NOTE:  Hasbro visibly reacted with shock when told Wave 03 was already available in some stores in the United States)

Hasbro:   Our overall goal is to make sure that the fans are getting the news first.  We want to make sure we’re delivering on that.  We don’t have control over everything but it is definitely on our radar to minimize some of the discrepancies there.

PwrRngr:  For the Wave 03 of the Lightning Collection, is there a rough time frame for a UK release?

Hasbro:  We are tentatively saying December 2019 but it really depends on the local retailers.

We’d like to thank Mona Ahn and Hasbro for their time at MCM London 2019 to talk Power Rangers with us.  Questions written by Toast and TokuChris, with consideration from social media followers’ questions.

Every other Ranger when JDF hears about a #PowerRangers anniversary special…

What are they looking at? ⚡️
Wrong answers only

More in-hand pics in this thread from @whenaiyy of the upcoming (and not yet announced) Dino Thunder Yellow #LightningCollection figure!

Let's say you had to wear a #PowerRangers Megazord outfit for an *entire day* - which do you think would be the most comfortable to walk around in? 🤔