“Kimberly must return home to face the fallout from her Ranger Slayer days but even she couldn’t have been prepared for the consequences of digging into Drakkon’s darkest secrets  …  In DRAKKON NEW DAWN, Anthony and Simone place our heroine in a situation where she’ll have to face enemies new and old, as well as a heartbreaking choice when confronted with the unthinkable!” – Dafna Pleban, Senior Editor, BOOM! Studios. 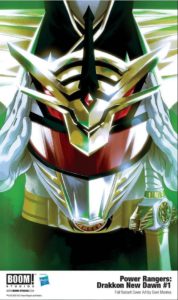 “After the shocking events of Power Rangers: Ranger Slayer #1, Kimberly is determined to purge the terrifying hold that Drakkon has had over her world, starting with Deadlock; the prison tower where Drakkon held all those who opposed him. But even the Ranger Slayer has no clue of the true power kept in Deadlock—and what unlocking the doors will set into motion. As Kimberly investigates the worst of Drakkon’s secrets, she sets in motion Drakkon’s final plan—one that will pit her against a fan-favorite Power Rangers villain like you’ve never seen them before!”

“I’m extremely excited to spend time in the Power Rangers universe, especially in the Coinless timeline of Lord Drakkon!  …  I hope fans are excited about this slightly darker, more apocalyptic tale starring some of our favorite new characters…and maybe a few returning old ones.” – Writer Anthony Burch

Covers and preview pages below. 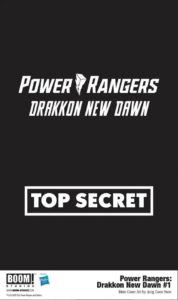 Your source of all the #PowerRangers news / toys / comics / games!

Update ⚡️ …The Power Rangers (along with Fred & Ginger) have been removed from Entwistle’s bio.

Could it mean something more than simply removing projects still in pre-production? Who knows! 👀

While @jonaent may have removed the Green Ranger from his Twitter header, his new bio suggests a possible working title for his upcoming #PowerRangers project.

Heads up US #PowerRangers fans! Spotted in wilds of Ohio, #LightningCollection Blue and Black Ninja Rangers!

Thanks to Instagram user “heo.hon16” we have our first unofficial glimpse at upcoming #PowerRangers Dino Fury 6’ figures (so not Lightning Collection) - including Void King and Lord Zedd!

GET IN GEAR! We asked, you voted and 'Doctor K', from #PowerRangers RPM, takes spot No 7.

What ep DESERVES to be part of the #SuperMegaMarathon? 🤔

⚡️Reply with the solo episode of your choice (no multi-parters). The reply with the most likes at 3/4pm CT tomorrow is our 8th!

This #PowerRangers cover puts the BOOM in @boomstudios!